On June 11th, about two dozen members of ACEC California toured the Bing Concert Hall on the campus of Stanford University.  The $112M project, which opened in January, was given ACEC California’s highest award for engineering excellence, the Golden State Award, earlier this year. 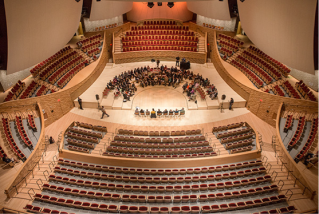 Principal and project engineer Ray Pugliesi and President and CEO Stacy Bartoletti of San Francisco-based Degenkolb, the ACEC member firm which designed the Bing project, were on hand to discuss the project’s engineering challenges.  According to Pugliesi, the entire project took more than six years from concept and design to completion of construction.

In the words of concert hall’s operations manager and tour director Matt Rodriguez, “The Bing is really a unique building  and Stanford had the foresight to put together a great team to design and build it.”

Matt added that the team, combined with a BIM process that saw the entire building engineered and design on computer before construction began, kept the project on time and on budget.

The 842-seat symphony hall is visually and structurally impressive and was designed to provide superior acoustics for symphonic music, no audience member is more than 75 feet from the stage.  Benefactors and Stanford alums Dr. Peter Bing and his wife, Helen, insisted on making the viewing experience as comfortable and “organic” as possible.  As a result, the hall has seats that are up to six inches wider than standard theater seating and some have more than a foot of extra leg room.