Mark Thomas and Company, Inc., of San Jose, won an Honor Award for its work on the I-280/ I-880/ Stevens Creek Boulevard Interchange Project in San Jose.

Santa Clara Valley Transportation Authority (VTA) retained Mark Thomas & Company (MTCo) in 2004 to study the feasibility of improving traffic operations, enhancing safety, and increase in capacity for the area focused around the interchange. MTCo continued on to complete the environmental/project development documents and final design for what at the end became a $63 Million improvement for the I-280/I-880/Stevens Creek Boulevard area. The project’s primary goals were to separate the freeway-to-freeway traffic from local traffic and to reconfigure the existing interchange to improve operations.

McMillen Jacobs Associates of Walnut Creek, is an ACEC California Honor Award recipient as a result of its work on the Bay Tunnel in Menlo Park/ Newark, which is the first tunnel excavated under the San Francisco Bay. 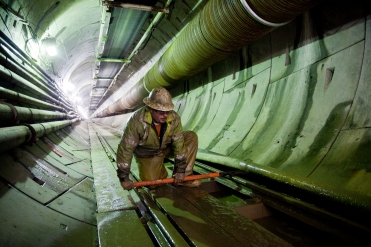 The $288 million project is a successful and significant part of San Francisco Public Utilities Commission’s (SFPUC) $4.6 billion Water System Improvement Program to upgrade the Hetch Hetchy Water System, which brings water through gravity-fed pipes from Yosemite National Park to the San Francisco Bay Area. The Bay Tunnel extends 5 miles under the Bay, replacing the aging water pipeline infrastructure built in the 1920s and 1930s that presently traverses the Bay on wooden trestles. The tunnel provides up to 224 million gallons per day of high-quality drinking water to about 2.6 million of the SFPUC’s customers in the Bay Area.

Walter P Moore of San Francisco is honored for its work on the Air Traffic Control Tower and Intergraded Facilities Building at San Francisco International Airport. 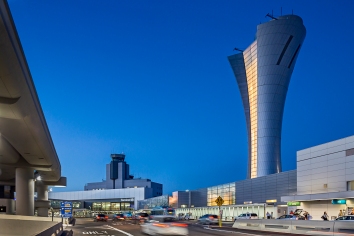 The iconic new tower, which replaced SFO’s long outdated 1960s-era control tower, is the first air traffic control tower delivered through a partnership between the airport and the FAA. The tower relies on an innovative vertical post-tensioned system to self-right the structure during a major seismic event, ensuring that air traffic controllers remain fully operational after a magnitude 7.5 earthquake. This is crucial since the airport is just four miles from the San Andreas Fault.

Marinas currently have no established design criteria for tsunamis thus this project required sound engineering judgment to justify the repairs to both funding and permitting agencies. Modeling performed to establish the tsunami loads was validated by a subsequent tsunami that occurred prior to final design of the project.

An EEA awards dinner will be held at the Hard Rock Café in San Diego, on January 28th, 2016, and Honor Award winning projects will have photographic panels on display at the Capitol, outside of the Governor’s office, during National Engineers Week in February 2016.

Because of their selection by ACEC California, Honor Award winners are eligible to enter the ACEC National level Engineering Excellence Awards competition, which takes place this winter.