Blackburn Consulting in Auburn was recognized by ACEC California for its work on the Southport Early Implementation Setback Levee Project in West Sacramento. 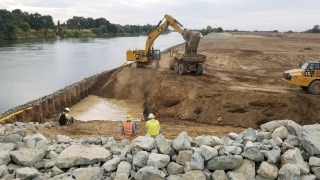 The Southport Early Implementation Setback Levee project is the largest piece of improvements to the West Sacramento levee system. It is one of the largest setback projects in the State of California. The project consisted of about 6 miles of improvements to a 100-year-old levee along the Sacramento River to mitigate seepage and stability deficiencies. This reach of the levee was considered the highest risk component to the flood control system surrounding West Sacramento, and the highest priority project to protect its 53,000 residents.

Blackburn Consulting worked with the design team, the City of West Sacramento Flood Control Agency, the US Army Corps of Engineers, the Department of Water Resources, Central Valley Flood Protection Board, Reclamation District 900, and a board of senior consultants to engineer a zoned levee with seepage berms and cutoff walls by transforming local soil to meet seepage and stability criteria, and could be constructed with available funds.

The new setback levee construction was completed in December of 2017. The success of this project has opened up the possibility for creative use of locally available soils to significantly reduce the project cost and meet USACE design criteria.